Houses for sale in Buckeye AZ - Houses in Buckeye 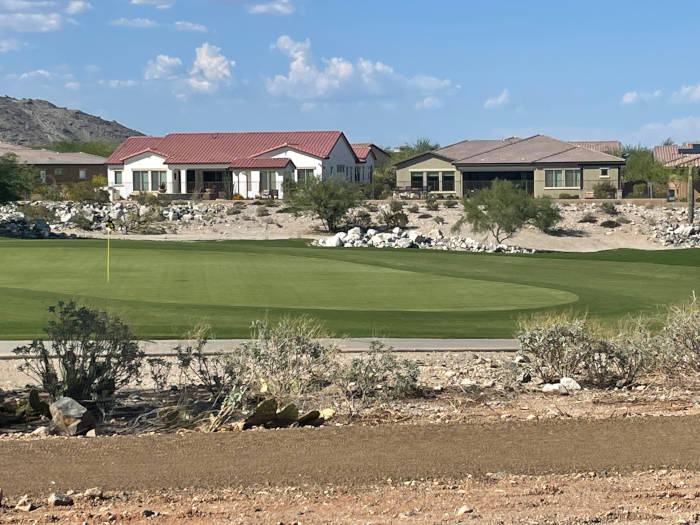 Early settler and Ohio native Malie M. Jackson dredged and developed 10 miles of the Buckeye Canal around the year 1885, setting the stage for growth. Jackson named the canal after Ohio's nickname, "The Buckeye State". The town that followed in 1888 was originally named "Sidney" by Jackson, but the town eventually became known simply as Buckeye

Buckeye AZ is on the far west side of the Phoenix metropolitan area, approximately 30 miles west of downtown Phoenix. The population is around 75,000 today, but that is expected to grow very rapidly; there are dozens of master-planned Buckeye AZ real estate communities in the works, such as Sundance, Riata West, Verrado, Tartesso, Westpark, and Festival Ranch. Furthermore, a company connected to billionaire Microsoft founder Bill Gates has purchased nearly 25,00 acres near Buckeye at $80 million. Bill Gates plans to build a "smart city" named Belmont nearby. The far western edge of the Phoenix metropolitan area is up and coming fast.

Maybe it’s due to all of the new real estate developments here, but Buckeye has an extremely low crime rate. In fact, the crime rate here is 48% lower than the rest of the state, and the crime rates have steadily declined every year.

Buckeye AZ is a place for nature lovers too; both Skyline Regional park and the Buckeye Hills Recreation Area offer thousands and thousands of acres of pristine desert landscapes for you to explore. Skyline is a massive 8,700-acre mountain preserve in the iconic White Tank Mountains. Hiking and camping are just minutes away, whenever you need to get away from the city.

Likewise, if you love golf, Buckeye AZ is the place, with at least four gorgeous golf courses within the city; Verrado, Sundance, Victory, and Copper Canyon Golf Clubs all offer stunning views of the mountains and a challenging game.

You won’t have to search long for Buckeye AZ homes for sale; with more than 30 master-planned communities in development, you’ll have your chance at affordable dream home. The beautiful new homes in Buckeye are priced 10% lower than the national average. In fact, buying is more affordable here than renting; rents here are 20% higher than the national average. Overall, Buckeye is ranked in the top 82% of all cities in the country. Buckeye AZ homes for sale are highly desirable and affordable, and Buckeye is one of the safest places in the Valley.

$424,999
4 Beds ⋅ 2 Baths ⋅ 6401380 MLS ⋅ Westpark Parcel 4s SubDv. ⋅ ACTIVE Status
Beautifully cared for home in the WestPark community, close to schools, parks, and easy access to I-10. The great room has high ceilings and is the epitome of open concept living that will make you love living here! Kitchen has granite countertops, ss appliances, and breakfast bar at the island. Split floorplan with 2 guest bedrooms and bath off the entryway. An additional guest bedroom is off the garage entrance, separate from the other rooms. Primary suite is off the back of the house with big bay windows that overlook the backyard. This dreamy backyard has a covered patio as well as extended patio with pergola. It also has mature landscaping, turf, and a pool to enjoy those AZ summers in. All new ceiling fans and exterior paint. Water softener system included. Solar info below.

$499,000
4 Beds ⋅ 2 Baths ⋅ 6404095 MLS ⋅ ACTIVE Status
Beautiful New home in the Rainbow Valley Area. 4 bedrooms, 2 baths, 8' doors, 9' ceilings, quartz countertops gives the kitchen a beautiful fresh look. Beautiful mountain views to the South and a view of the city of Buckeye to the North. Enjoy the view of the city lights at night. 16 min from grocery store and other shopping.

Listing courtesy of Your Realty Office.

$435,000
4 Beds ⋅ 3 Baths ⋅ 6403795 MLS ⋅ Tartesso Unit 2a SubDv. ⋅ ACTIVE Status
72 Hour Home Sale...offers to be review by 5/30This newly-built 4 beds, 3 baths + den, 3 car garage home in a thriving Tartesso Community could be yours today! This is not even a year old.The builder will be coming in September to to the 1 year check/touch up on everything.Huge backyard for your wildest dream.

$399,000
3 Beds ⋅ 2 Baths ⋅ 6403816 MLS ⋅ Valencia SubDv. ⋅ ACTIVE Status
Beautiful upgrades, new porcelain tile flooring throughout, all new doors inside and out, new paint inside and out, new roof, Brand NEW AC Unit, NEW WINDOWS, landscaping complete with fruit trees in the back yard, new paver sidewalk and patio on the North side of the home.Newly renovated kitchen, large island with seating area, and quartz counter tops. New SS appliances, huge French door refrigerator. Bathrooms all new and modern. All new lighting fixtures with a modern look. New laundry room with plenty of storage and utility sink. NO HOA, come and live how you want. Come take a look, this pretty home waiting for it's new owners to make it their own.

Listing courtesy of Realty ONE Group.

Listing courtesy of Realty ONE Group.

$495,000
3 Beds ⋅ 2 Baths ⋅ 6403640 MLS ⋅ Watson Estates SubDv. ⋅ ACTIVE Status
Turn key ready! A charming 3 bedroom, 2 bathroom home which includes a spacious den. An open concept kitchen and great room has plenty of entertainment space. New window shutters, carpet and sliding glass doors installed in 2022. Out back you find an inviting pebble-tee pool, with waterfall, and maintenance free yard with new synthetic grass and plenty of pavers. Thought the new property gates, you'll find the perfect mechanics garage. Epoxy floor, cabinets and opener all installed this year. Stop by today to see everything it has to offer!

$430,000
3 Beds ⋅ 2.5 Baths ⋅ 6403838 MLS ⋅ Sundance Parcel 31 SubDv. ⋅ ACTIVE Status
Move in ready home, 3 bedrooms and a den with 2.5 bathrooms, ready to become your forever home. Garage recently painted and carpets professionally cleaned. backyard ready for grass recently updated sprinklers in back yard. This home will not last so hurry and view it before its too late.

$699,900
3 Beds ⋅ 2 Baths ⋅ 6402841 MLS ⋅ Verrado Highlands District Phase 1 SubDv. ⋅ ACTIVE Status
Gorgeous new build/never lived in home in the Highlands at Verrado, gated community. From the upgraded paver driveway to the stunning gourmet kitchen, nothing was overlooked in this beautiful property. Upon entry, the attention to detail is apparent: plank tile throughout, custom tile in baths and laundry, 4-inch baseboards, berber carpet in bedrooms, custom two-tone paint, soaring 12+ foot ceilings and bright, open concept. The heart of this home is the well-appointed gourmet kitchen, boasting contrasting quartz countertops, grey shaker cabinetry, gas cooktop, stainless steel appliances and walk in pantry. All overlooking the spacious great room with plenty of windows, and an oversized slider that leads out to the landscaped backyard with mountain views. Split floorplan offers a primary suite with en suite bath, showcasing separate tub and shower with rain fixture, walk in closet and dual vanities. Two additional bedrooms and a den round out the floorplan. A must see! Set up your showing today!

$140,000
6403733 MLS ⋅ ACTIVE Status
1.26 acres of land ready to be bought and constructed on for beautiful home. Great investment property with water and electricity right on it! No HOA!! Come and take a look today!

All information should be verified by the recipient and none is guaranteed as accurate by ARMLS. Copyright 2022 Arizona Regional Multiple Listing Service, Inc. All rights reserved.