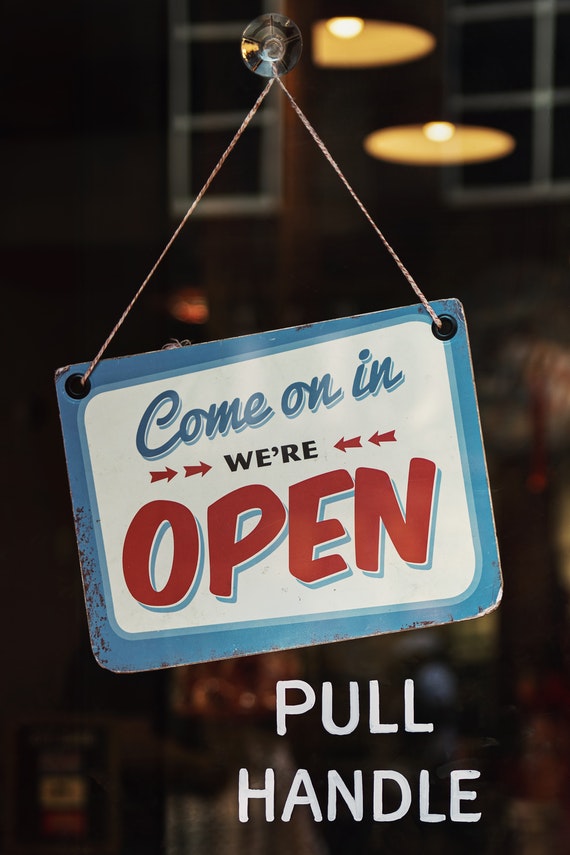 How is unemployment going to affect Arizona real estate in 2020? Last Friday, the Bureau of Labor Statistics (BLS) released its latest jobs report. It revealed that the economic shutdown made necessary by COVID-19 caused the unemployment rate to jump to 14.7%. Many anticipate that next month the Arizona percentage could be even higher. These numbers represent the extreme hardship so many families are fighting right now. That pain should not be understated.

However, the long-term toll the pandemic will cause should not be overstated either. There have been numerous headlines claiming the current disruption in the economy is akin to the Great Depression, and many of those articles are calling for total Armageddon. Some experts are stepping up to refute those claims.

In a Wall Street Journal (WSJ) article this past weekend, Josh Zumbrun, a national economics correspondent for the Journal explained:

“News stories often describe the coronavirus-induced global economic downturn as the worst since the Great Depression…the comparison does more to terrify than clarify.”

Zumbrun goes on to explain:

“From 1929 to 1933, the economy shrank for 43 consecutive months, according to contemporaneous estimates. Unemployment climbed to nearly 25% before slowly beginning its descent, but it remained above 10% for an entire decade...This time, many economists believe a rebound could begin this year or early next year.”

Here is a 2020 graph comparing current unemployment numbers (actual and projected) to those during the Great Depression: 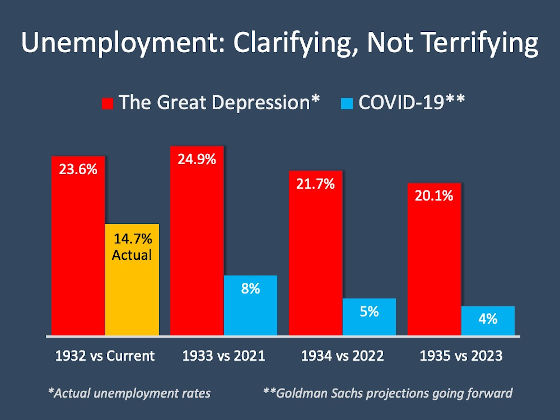 Notice, the two unemployment situations do not compare.

What makes 2020 so different from the Great Depression?

This was not a structural collapse of the economy, but instead a planned shutdown to help mitigate the virus. Once the virus is contained, the economy should immediately begin to recover. 2020 is nothing like what happened in the 1930s. In the same WSJ article mentioned above, former Federal Reserve Chairman Ben Bernanke, who has done extensive research on the depression in the 1930s, explained:

“The breakdown of the financial system was a major reason for both the Great Depression and the 2007-09 recession.” He went on to say that today - “the banks are stronger and much better capitalized.”

What about the families and small businesses that are suffering right now?

Arizona’s collective heart goes out to all. The BLS report, however, showed that ninety percent of the job losses are temporary. In addition, many are getting help surviving this pause in their employment status. During the Great Depression, there were no government-sponsored unemployment insurance or large government subsidies as there are this time.

Today, many families are receiving unemployment benefits and an additional $600 a week. The stimulus package is helping many companies weather the storm. Is there still pain? Of course. The assistance, however, is providing much relief until most can go back to work.

We should look at the current situation for what it is – a predetermined pause placed on the economy. The country should recover once the pandemic ends. Comparisons to any other downturn make little sense.

“I don’t find comparing the current downturn with the Great Depression to be very helpful. The expected duration is much less, and the causes are very different.”

Buyers in some areas of Surprise AZ are faced with looking at homes, making offers and being told there are multiple offers on the homes.  Condition, neighborhood and price range are a big factor.

Back to the recent 2020 survey – which measures perceptions of the housing market and Americans' financial health – revealed that housing sentiment has fallen but, despite rising pessimism, consumers don't foresee significant changes to affordability factors in the coming year.

In fact, survey results show 36 percent of respondents think home prices will stay the same over the next year, compared to 23 percent who say they expect an increase and 34 percent who expect prices to fall.

Unemployment will be a huge factor with getting Surprise Arizona back to work and recover from Covid 19 financial mess as soon as possible.

Among respondents expecting a drop, the average predicted home price decline was 2 percent. Similarly, 35 percent of participants said home mortgage rates will stay the same, while 33 percent expect a decline and 23 percent see rates rising.  Some real estate professionals feel there is more room to go up then down.  Maybe lower rates would still help boost the real estate market?

“While consumers did grow more pessimistic in April about whether it's a good time to buy a home, low mortgage rates remain a driver of purchase optimism,” Duncan said. “We expect that the much steeper decline in selling sentiment relative to buying sentiment will soften downward pressure on home prices.”

Rural Living on the rise!

While many people across Arizona have traditionally enjoyed the perks of an urban lifestyle, some who live in more populated city limits today are beginning to rethink their current neighborhoods. Being in close proximity to everything from the grocery store to local entertainment is definitely a perk, especially if you can also walk to some of these hot spots and have a short commute to work. The trade-off, however, is that highly populated cities can lack access to open space, a yard, and other desirable features. These are the kinds of things you may miss when spending a lot of time at home. When it comes to social distancing, as we’ve experienced recently, the newest trend seems to be around re-evaluating a once-desired city lifestyle and trading it for Waddell, Wittmann, Surprise, and other smaller cities.

“With the re-opening of the economy scheduled to be cautious, the impact on consumer preferences will likely shift buying behavior…consumers are already looking for larger homes, bigger yards, access to the outdoors and more separation from neighbors. As we move into the recovery stage, these preferences will play an important role in the type of homes consumers will want to buy. They will also play a role in the coming discussions on zoning and urban planning. While higher density has been a hallmark of urban development over the past decade, the pandemic may lead to a re-thinking of space allocation.”

The Harris Poll recently surveyed 2,000 Americans, and 39% of the respondents who live in urban areas indicated the COVID-19 crisis has caused them to consider moving to a less populated area. 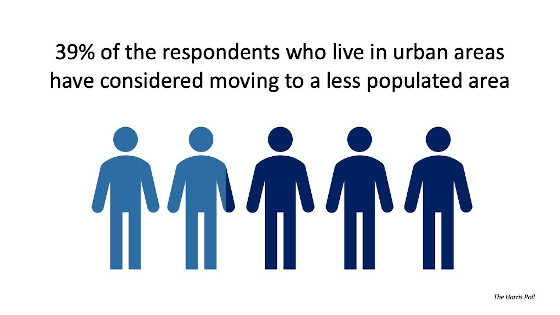 Today, moving outside the city limits is also more feasible than ever, especially as Americans have quickly become more accustomed to – and more accepting of – remote work. According to the Pew Research Center, access to the Internet has increased significantly in rural and suburban areas, making working from home more accessible. The number of people working from home has also spiked considerably, even before the pandemic came into play 2020.

If you have a home in the suburbs or a rural area, you may see an increasing number of buyers looking for a property like yours. If you’re thinking of buying and don’t mind a commute to work for the well-being of your family, you may want to consider looking at homes for sale outside the city. Let’s connect today to discuss the options available in our area.

Posted in Market Updates, Surprise Arizona
no comments yet
Please enable Javascript to comment on this blog